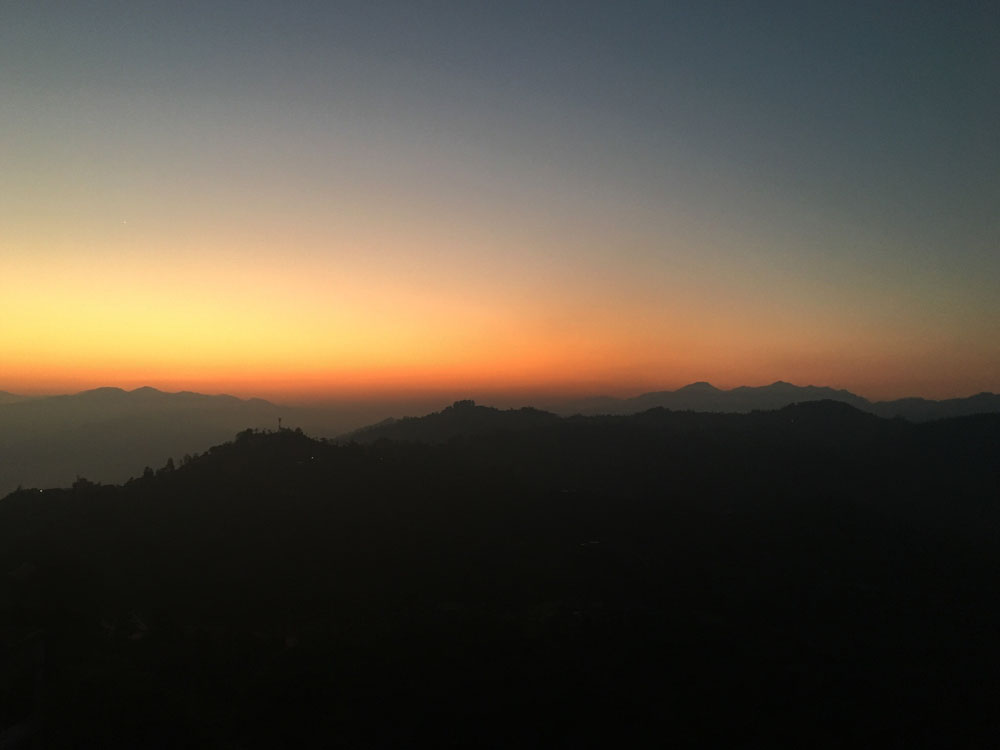 Today is my first day in Nepal travelling with 12 fellow Swedes and 2 guides; Jenny and BJ from Beyondborders Nepal. I’ve been longing for this trip for so long know it feels amazing to finally be here! For our first night, after a long, 2 leg-flight to Kathmandu we stayed at Namo Buddha Monastary located just a couple of hours away by bus. It is a beautiful place, quiet and clean. In the evening you can see a wonderful sunset and the sunrise is equally amazing. The monastery itself was as beautiful as its surroundings. Breakfast was served in the dining hall with the monks. Buttertea, steamed bread and a smoking hot stew!

From the Buddhist point of view, Namo Buddha is one of the most important religious sites in Nepal. It is the place where the Buddha, in a previous life as a prince, gave his live to a starving tigress and her cubs. 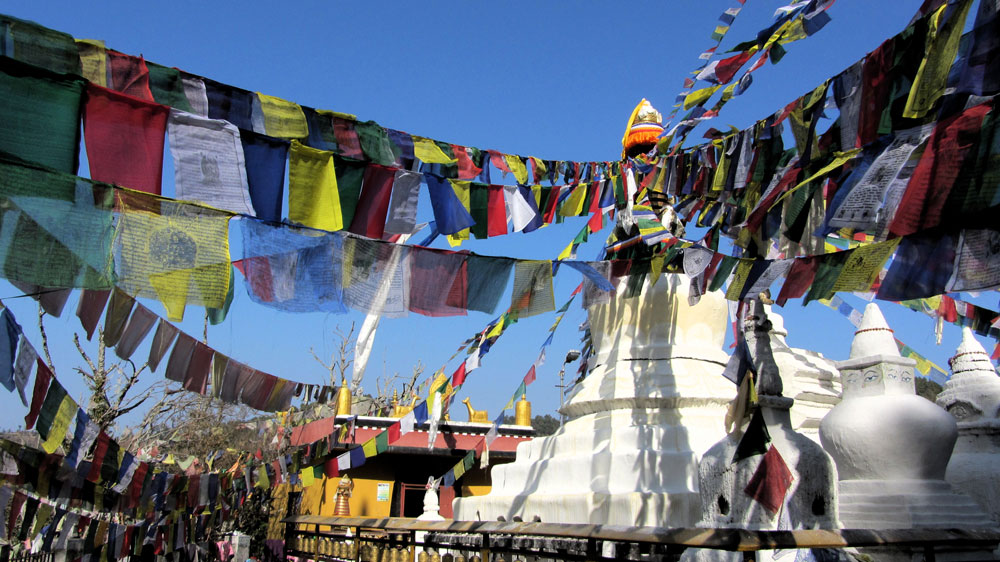 The bones of the prince who sacrificed his life 6000 years ago was buried in a tomb which is now the actual stupa of Namo Buddha, seen above in a photo by Michael Cornelius. The story of the prince is found at the bottom of this page 🙂 Two children cleaning the butterlamps at the Namo Buddha stupa. A monk, whos name I have unfortunately forgotten, gave us a guide of the complex. 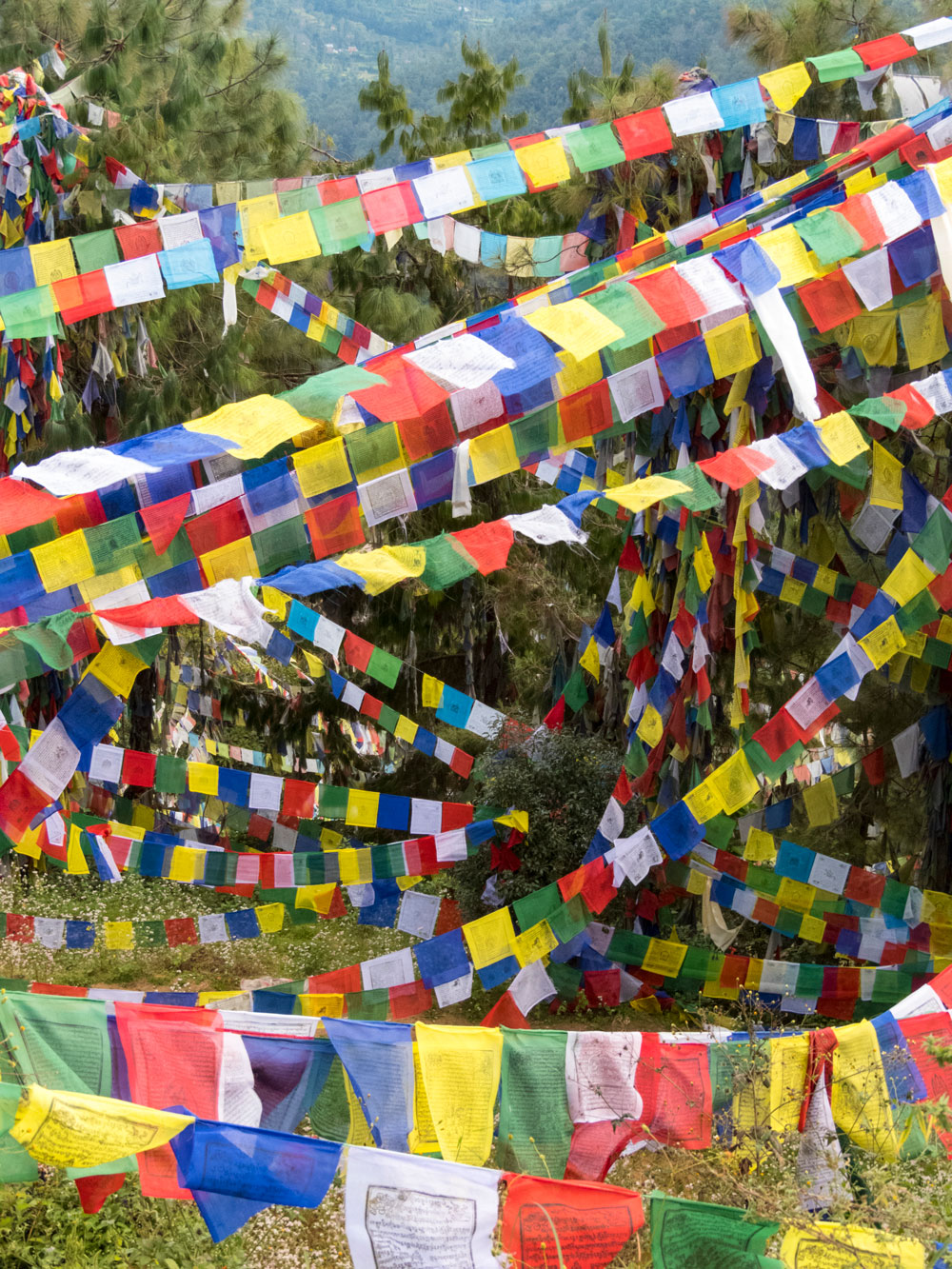 Prayer flags are used to promote peace, compassion, strength, and wisdom. Tibetans believe the prayers and mantras will be spread by the wind and bring good will and compassion to benefit all beings.

Tibetan prayer flags are used to promote peace, compassion, strength, and wisdom. It is believed that the prayers and mantras will be spread by the wind and bring good will and compassion to benefit all beings – so it’s important they are placed in a windy spot. Traditionally the flags come five colors: blue, white, red, green, and yellow. The five colors represent the elements: blue symbolizes the sky and space, white symbolizes the air and wind, red symbolizes fire, green symbolizes water, and yellow symbolizes earth. When raising prayer flags it is important to have a good motivation – no selfish or limiting thoughts. You pray for others, not yourself. All beings everywhere should benefit and find happiness. 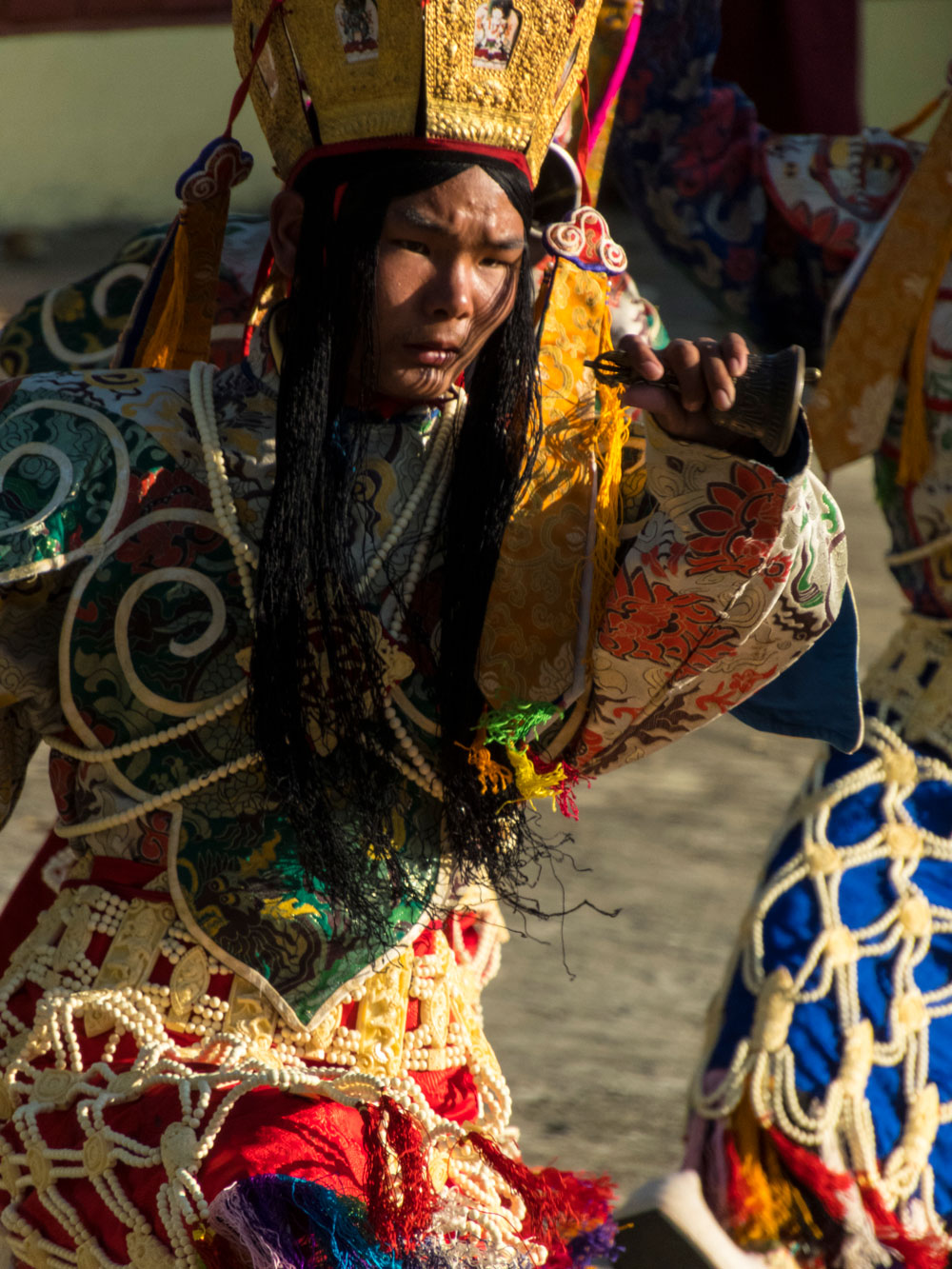 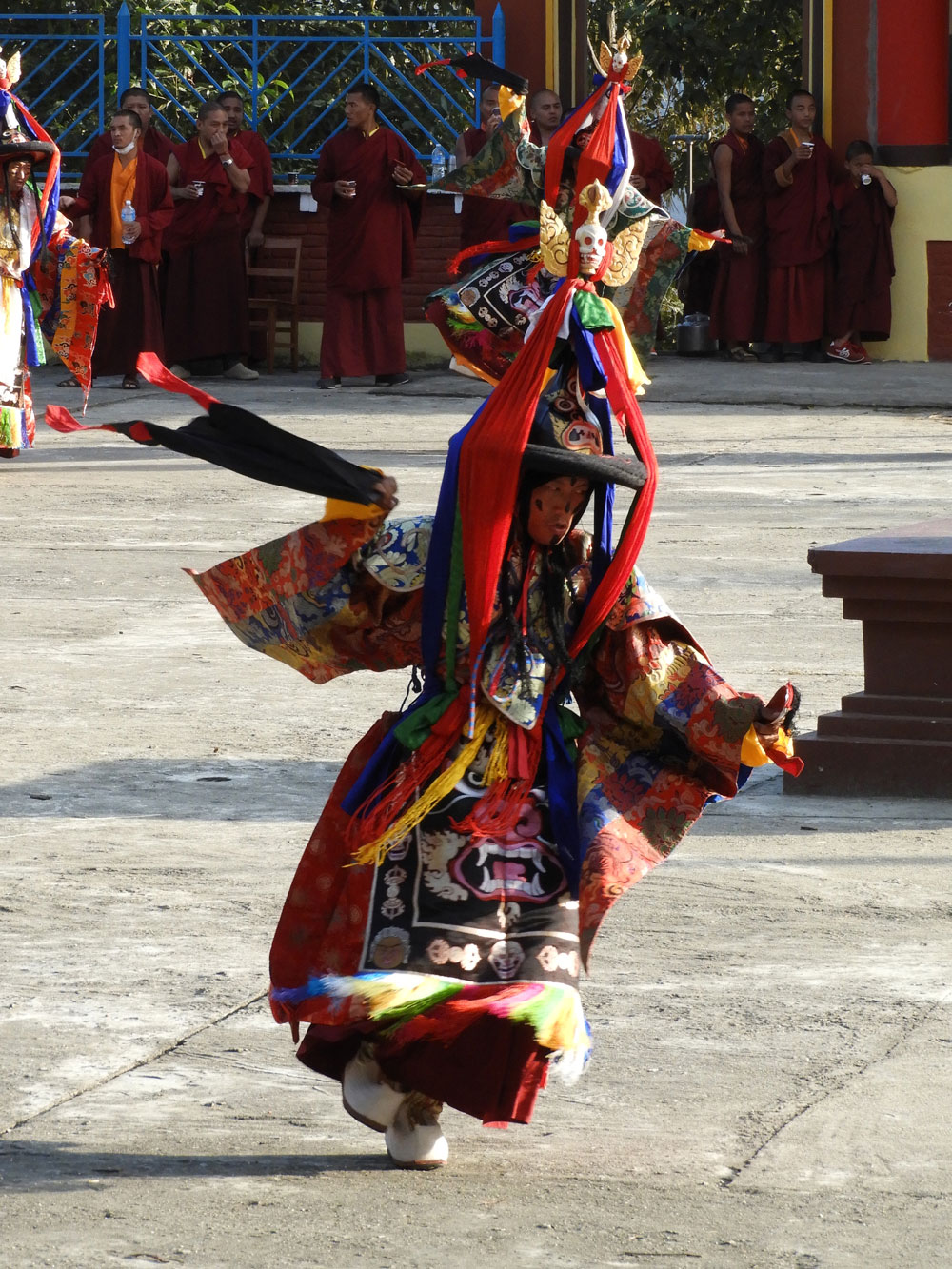 This is the long story of how Namo Buddha became a sacred place. Eons ago a king named Great Charioteer ruled over a small kingdom. He had three sons: Great Sound, Great Deity, and Great Being. Great Sound and Great Deity was skilled in martial arts and helped the king to rule. Great Being, the youngest son, was very bright, kind and compassionate.  One day the king and his entourage left town to spend time in the countryside. After half a day’s ride, they arrived at a place of thickly wooded forests and nearby blossomed a tapestry of flowers in rich variety. Here they set up camp and enjoyed an eighteen course meal with wine and sake.

After dinner the three princes picked up their bows and arrows and headed for the forest. In the dense woods they noticed a den. Inside a tigress slept beside her cubs. Great Sound and Great Deity laid arrows on their bows, ready to kill the tigress, but Great Being stopped his brothers, saying that killing was wrong. When he looked into the cave again, Great Being noticed that the tigress was not able to move, for she had just given birth and she was tormented by hunger, unable to even lift her head. Great Being asked his brothers, “What kind of food would save the tigress and her cubs?” They responded, “This kind of red Indian tiger eats the warm flesh and blood of a recent kill. So if you want to help her and the cubs, you must find flesh and blood that are fresh.” Great Being thought: “It’s indeed true that to save the tigress and her cubs, warm flesh and blood are needed. But then I’d have to kill another living being, and that would mean killing one to save another. What else can I do?” He thought for a long while but did not find a solution.

The brothers started the journey back to the camp and Great Being thought, “For a long time, I have been wasting countless lives, sometimes due to excessive desire, sometimes aversion, and sometimes ignorance. I have rarely met such an opportunity to accumulate merit. What real use is this body if not for the Dharma?” Finally he decided, “This time I must be truly generous.” Before he had gone very far with his brothers, he said to them, “Brothers, you two go on ahead. I have something to take care of and will catch up with you soon.” He took the path to the tigress’s den. The collapsed tigress was so exhausted she could not even open her mouth and bare her fangs. Great Being sharpened a splinter from a nearby tree and cut his body to draw blood. The tigress licked the blood and not long after she opened her jaws, stood up and with a roar devoured the prince.

When Great Being did not return, the two elder brothers set out to find him. Reflecting on what he had said earlier, they had no doubt that he had returned to the tigress’s den. When they arrived and looked inside, there was nothing left of their brother but blood, bones, nails, and bits of clothing. Sobbing with deep sadness the two gathered up scraps of their brothers clothing and started the journey back to camp. During this time, the queen was taking a nap and in a dream saw three doves flying high in the sky. As they fluttered around, a hawk struck and carried off the smallest one. Waking in terror, the queen immediately related her dream to the king. He replied, “Hearing your story, I believe the three doves are our three sons. The youngest of them, carried off by the hawk, is my most beloved son. I’m sure that something dreadful has happened to him.” The king immediately sent out servants to look for his son. Soon however, the two princes arrived and the king asked, “Did something bad happen to my beloved son? Do you have any news?” Choked with sadness they told their parents that the tigress had eaten Great Being. The queen fainted and the king was overwhelmed with sadness. After a long while the two princes, the king, and the queen went to the place where the youngest prince had died. When they arrived at the opening of the den, what met their eyes were the bones and rivulets of blood left behind by the tigress.

Meanwhile, the young prince had been reborn as Great Courage (Nyingtob Chenpo). He wondered, “What did I do to be reborn here in the celestial realm of Tushita (note: one of the six deva-worlds in Buddhism)?” Through his divine eye Great Courage saw his family gathered around the bone fragments he had left behind. They were completely miserable. He thought, “My parents are experiencing such unhappiness, it could threaten their very lives. To lighten their spirits, I’ll go talk to them.” He descended from space to the lofty sky and spoke words of encouragement to comfort his parents: “I’m the prince Great Being. After giving my body in generosity to the starving tigress, I was reborn in the celestial realm of Tushita.” With tears in their eyes, the king and queen said, “Son, you who are like our very heart, offering your body to the tigress was certainly most praiseworthy. But whom can we tell of our suffering in missing you?” Great Courage replied, “Please do not be unhappy. The end of birth is disintegration, and the end of gathering is separation. No one can transcend this for it is the nature of things. It is the same for everyone. If you perform evil actions, you will fall into the hell realms; if you perform virtuous actions, you will be reborn in the higher realms. Therefore, diligently pursue virtue. Make aspiration prayers, and in the next life we will definitely meet in a celestial realm.” The king and queen became a little happier and made the commitment to pursue virtuous activity. They created a small casket covered with seven kinds of jewels in which they laid the bones of their son and a stupa was built over the place in which it was buried.

After Great Being offered his body in generosity to the tigress, people found it difficult to travel through the region for fear of all wild animals, so they developed the practice of reciting “Namo Buddhaya” (“I take refuge in the Buddha”) to dispel their anxiety. To this day, the local inhabitants call the area Namo Buddha. Source: NamoBuddha